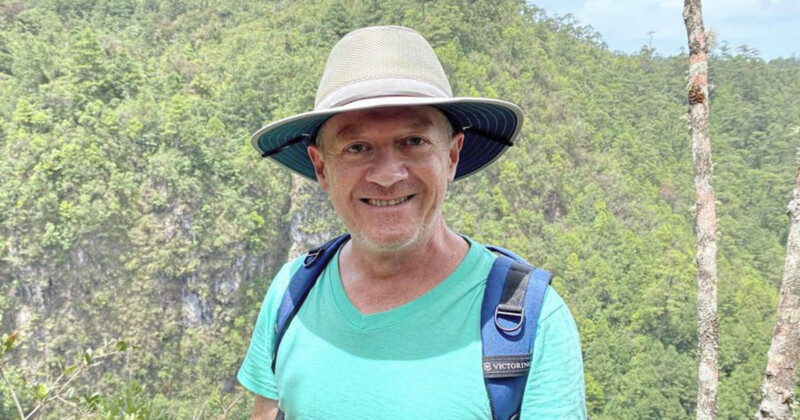 Roberto Murphy was born in San Cristobal de Las Casas, a colonial city in the Mexican state of Chiapas. His parents were living in Chicago, Ill. but Roberto’s mother was Mexican and decided to have her baby in Mexico, so she made a special trip to have her baby. Right after Roberto was born in Mexico he was brought to Chicago. Eventually the Murphy family moved to Dallas, Texas. Five years later, the family moved back to Roberto’s birthplace, San Cristobal in Chiapas.

Roberto grew up in a completely bilingual home. After high school he moved to the United States and lived in the San Francisco Bay area for five years, during which time he went to school and worked. However, the love for his homeland was so great that he decided to go back to Mexico and set up his permanent residence in Chiapas.

Roberto discovered his passion for the ancient Maya history when he was hired as an artist to draw pictures of potshards and artifacts that were being excavated by archaeologists of the New World Archaeological Foundation. This gave him the opportunity to plunge into the world of Mesoamerican art and history, inspiring him to study more about these subjects.

Roberto started guiding at a young age because of his bilingual skills and passion for the Maya culture. He did his first tours to ancient May sites at a time there weren’t many roads in Chiapas. The sites were remote and could only be reached by bush plane, boat, horse back or trekking. You had to camp in the rainforest because it took days to reach the sites. For years Roberto has been going to those sites that are now readily accessible, however new sites continue to be discovered and some are still of difficult access.

Roberto is an expert in Chiapas ancient history, colonial period, and contemporary Maya peoples culture. As a certified guide he does professionally what he is passionate about, that is to share his encyclopedic knowledge with visitors. Designing his tours to be unforgettable experiences.

Roberto lives on the edge of a cloud forest reserve just outside of San Cristobal. When he’s not guiding, he likes to devote time to his family and sustainable farming projects. Over the last couple of decades Roberto has voluntarily reforested thousands of endemic trees in and around his hometown.

The guide wrote about: