Highlands and Lowlands of Chiapas 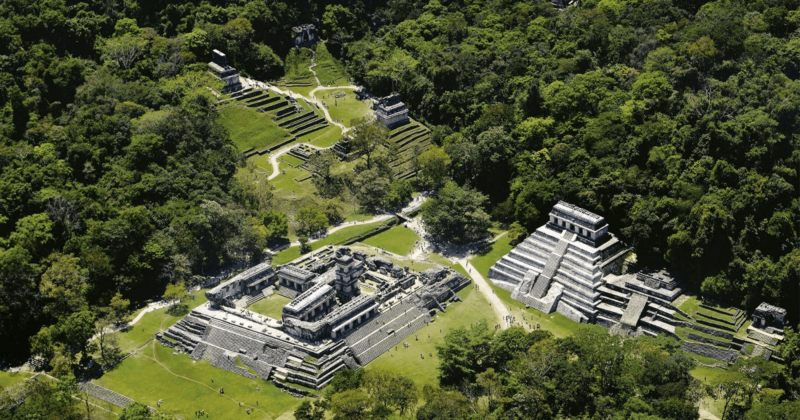 The most convenient way to visit Chiapas in four or five days minimum is by flying into either one of the two airports and depart from the other. Tuxtla airport and Villahermosa airport. It is recommended to arrive on an early flight, landing before 12:00 noon and depart on a flight that leaves sometime after 3:00 p.m. Say arrive in Tuxtla and depart from Villahermosa or the other way around.

The two bases in Chiapas, San Cristobal and Palenque are connected by a windy, yet scenic road that has impressive destinations along the way. The massive Maya pyramid of Toniná is halfway between these two cities, as well as a few breathtaking waterfalls like Agua Azul and Misol Ha.

The Tzotsil Maya of Chiapas had been living for centuries in the highlands of Chiapas when they were conquered by the Spanish in the XVI century. San Cristobal de Las Casas is a blend of Indigenous culture and Spanish colonial architectural style. It is a very lively place with a lot going on in its many walking streets. Nearby are half a dozen Indian villages that hold traditional markets on different days of the week. San Cristobal can be your base to visit the Indian markets, impressive natural sites such as the Sumidero Canyon, Chiflón waterfall, Montebello Lakes. Around San Cristobal and surrounding areas there are plenty of places to go hiking, biking and birdwatching. You can take San Cristobal as your base for a few nights to enjoy the sites and parks as well as great food in the many excellent restaurants, coffee shops and bars. San Cristobal is easily reached by the Tuxtla Gutierrez airport, only one hour drive from town.

On the north side of Chiapas is Palenque, one of the most breathtaking Mayan sites. Surrounded by lush rainforest, nearly a dozen of crystal-clear streams run through the ancient city forming cascades that were managed by the ancient Maya of Palenque. At its center surrounding the grand ceremonial plaza is the royal palace and the funerary corridor with the grand tomb of the greatest king that Palenque ever saw, Lord Pakal.

Palenque is readily accessible by air with its own airport and the airport of Villahermosa, Tabasco only two hours from the site. Palenque has great hotels to stay and turn this into your base for a couple of days exploring ancient Maya ruins and turquoise blue waterfalls, such as Roberto Barrios, Misol-Ha and Agua Azul.

Ona a day trip out of Palenque you can visit other Maya sites set in rain forest reserves of Chiapas, such as Yaxchilan on the Usumacinta river and Bonampak that features the best preserved Maya murals dating back to 792 C.E.