Every autumn, millions of monarch butterflies fly three months and 4,500 kilometers from the United States & Canada until arriving in Mexico, where they remain safe from the cold winter. Contrary to their parents, these butterflies born in late September can survive up to five months if they overcome the dangers of the long trip.

The destination of the most extensive migration in the world of the insects was for many years a mystery until 1975, when the first refuge of this species was found in Mexico. To present day, it’s well known that the monarch butterflies are hidden up to the volcanic mountains, away from the urban areas, forming extraordinarily dense colonies in the pine and oyamel (abies religiosa) forests of the State of Mexico and Michoacan. 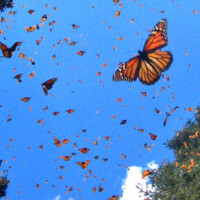 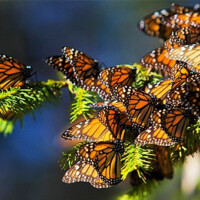 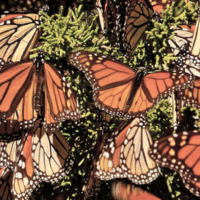 The group of trees from 20 to 50 meters high, with dense branches and needle leafs generates a special microclimate. The intensity of the light is low, the temperature stays stable, humidity is high and the wind blows slowly. In the next months, the colonies of butterflies move toward the pinewoods, generally less dense. Their only food, algodoncillo, contains a toxic substance that the butterfly absorbs and protects them from some of their predators. The following generations continue the migration towards the north.

Year 2000 was decisive to protect the monarch butterfly. The area for their protection, established from 1980 called Reserves of the Biosphere Monarch butterfly, was extended from 16,110 to 56,259 hectares. The Fund for the Conservation of the Monarch butterfly was created the same year. 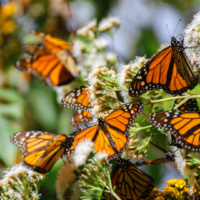 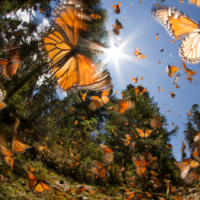 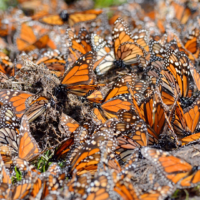 The Fund is an important amount of money, contributed by a private American foundation & the Mexican government. The money produces interests that are distributed twice a year, to the land proprietors of the Reserves; those that have complied with its commitment of not cutting trees down and that have participated with their labor for the conservation of the forests. This support is only kind in Mexico.