WHAT CAME FIRST, THE EGG OR THE FLAMINGO? 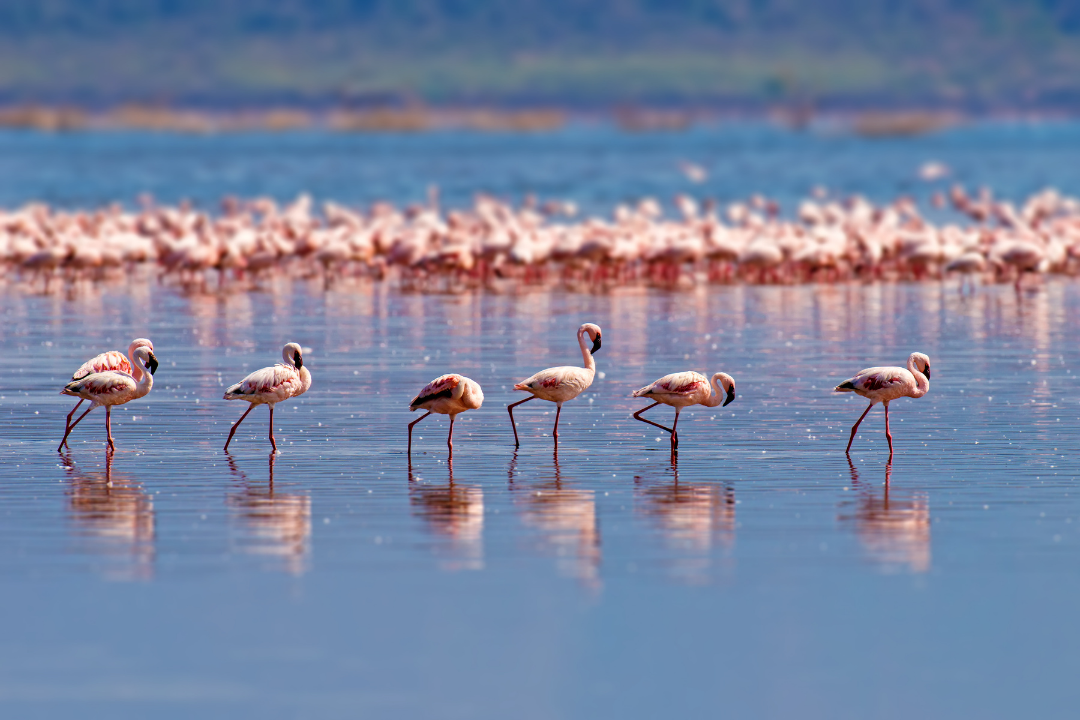 Let’s start with this, every February the flamingo (Phoenicopterus ruber) mating season begins, and that is prefect time to observe how the males do their ritual to get females’ attention.

The mating ritual goes like this: adult males come together in a circle, extend their wings to both sides, and turn them outwards to show the black feathers below their bodies, this first is to make females pay attention; they raise their necks to look higher, and this is attractive to females, and they walk inside the circle raising their legs in a dance way and squawking, making a spectacular sound.

The female group, found in a short distance, don´t pay much attention to the male´s ritual and pretends to be eating, but like many people say “one eye to the cat and another to the doodle”; the females are actually making a choice out of the male group to identify the one they will mate for that season only.

Once the female chooses a male, she captures his attention by flying away from the flocks, to finally complete the love act. After this last, both of them take flight to Río Lagartos located over 300 km away from Celestún (their natural habitat where they stay a longer time in a year)

They must arrive there to Rio Lagartos (Alligator River) within a month to build up the nest, which looks like a cone shape mini volcano: about 30 cm diameter at the base, 20 cm high and close to 15 cm diameter at the very top. One month after they mated, the female lays an egg which will be incubated by both parents until the baby flamingo sprout. It´s born in white color and both parents will feed it for a month after which, it´s going to be abandoned in Río Lagartos, where all baby flamingos stay for two years as they grow and get strength to take flight back to Celestún (the natural habitat) with the flock of adults. 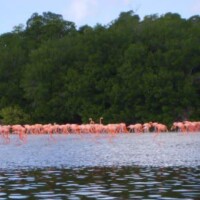 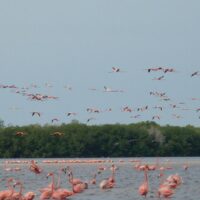 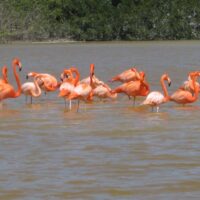 Since they belong to a rich ecosystem, local predators to the flamingos are snakes, alligators, jaguar & pumas as well. The flight from Celestún to Rio Lagartos is a survival flight to get away from the danger that means to stay there. This is probably the reason many baby flamingos are left behind so, they better grow strong; learn to survive and fly away.

Once they get back to Celestún, they are plenty of food there and change the color of feathers from white to gray and shade of pink, to finally get scarlet red as they get older.

This red color is thanks to the carotene content of shrimp and larvae they feed with their beaks that work as shovels, collecting the mud from the bottom of the lagoon, and expelling the excess of water and mud in each bite to eat the larvae and shrimp only. Thanks to this, people call them pink flamingo too.

At 4 years of age, flamingos become mature and begin the cycle of life with the mating ritual described above; their longevity is calculated up to approximately 15 years.

Visiting the pink flamingos in Yucatan is certainly a close up to wildlife. When you can come to watch them, help the protection programs already established to preserve the flora & fauna. 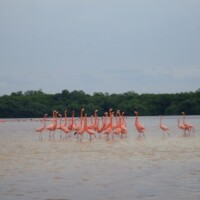 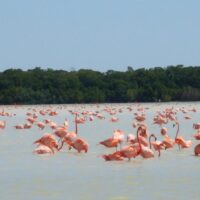 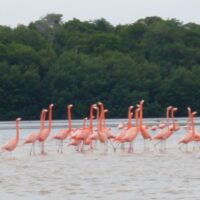 “What came first, the egg or the flamingo?” by Fernando Hernández.